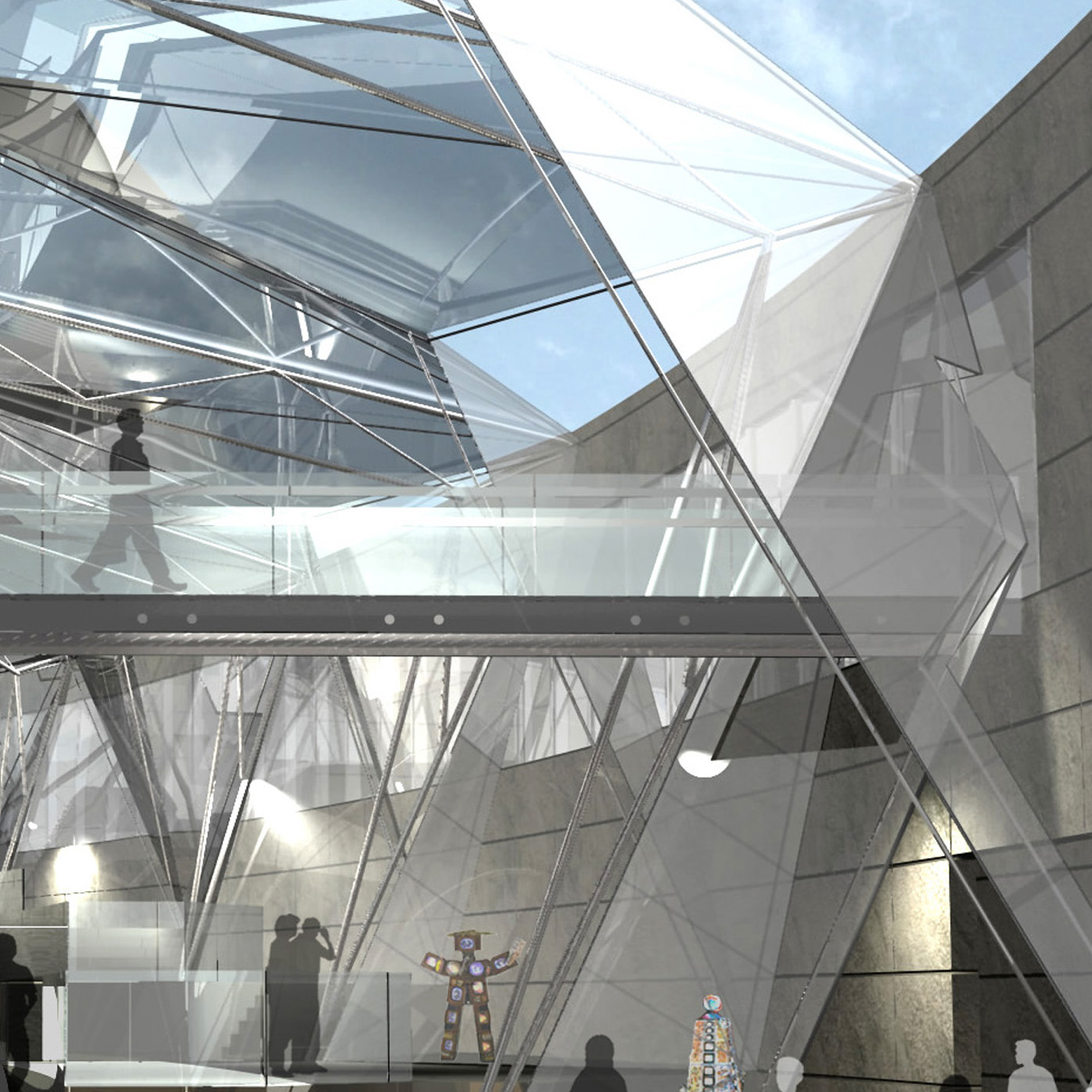 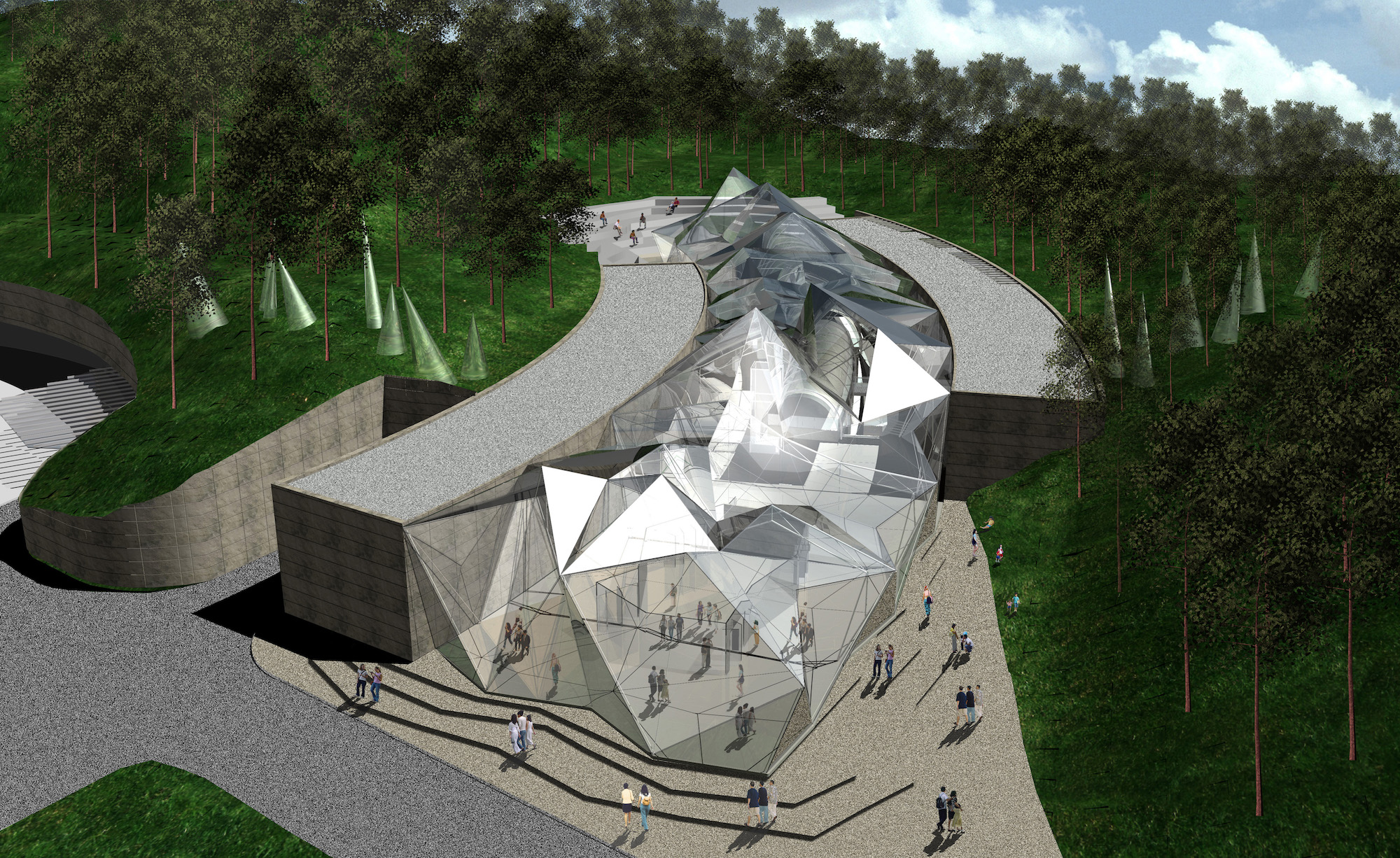 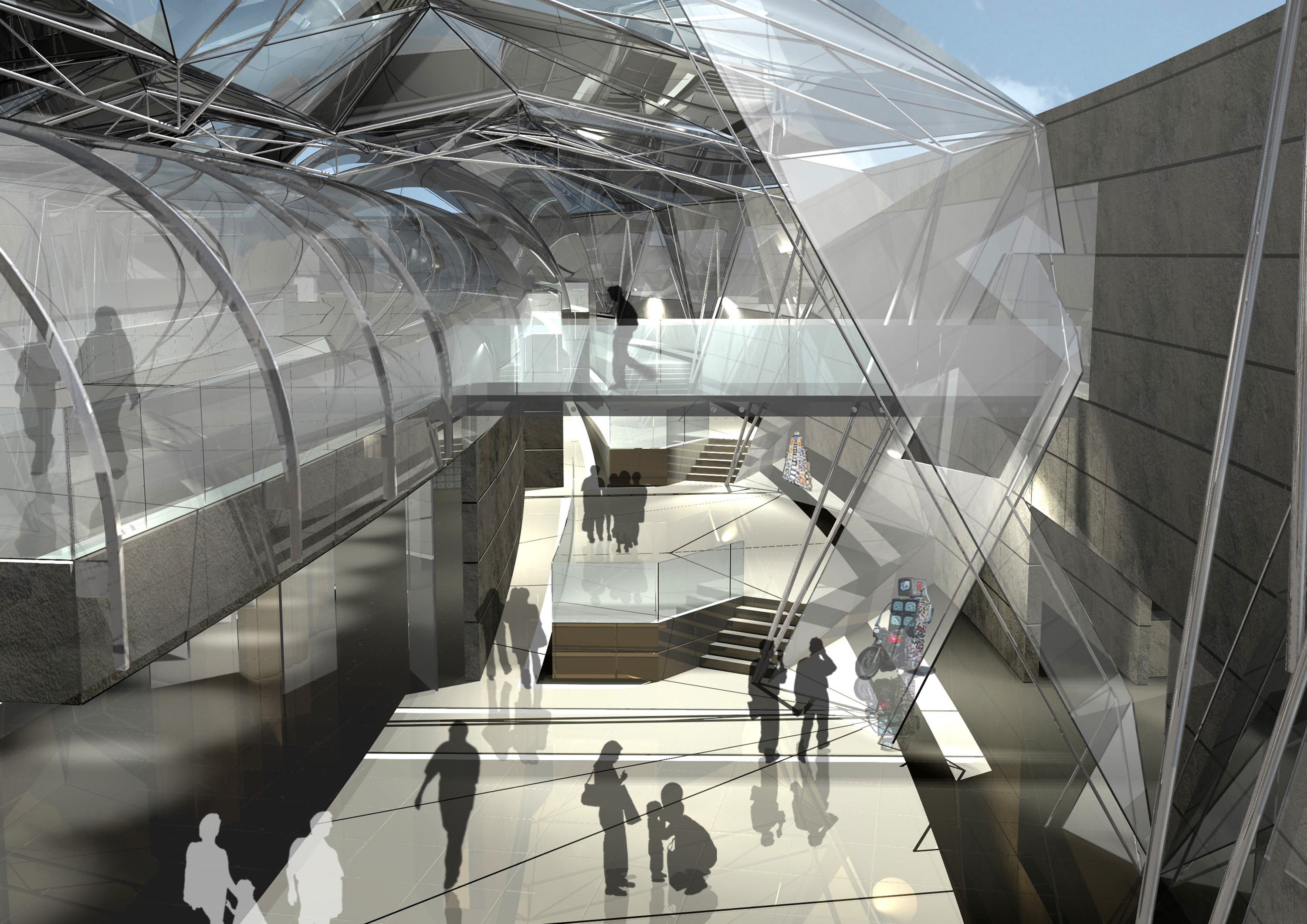 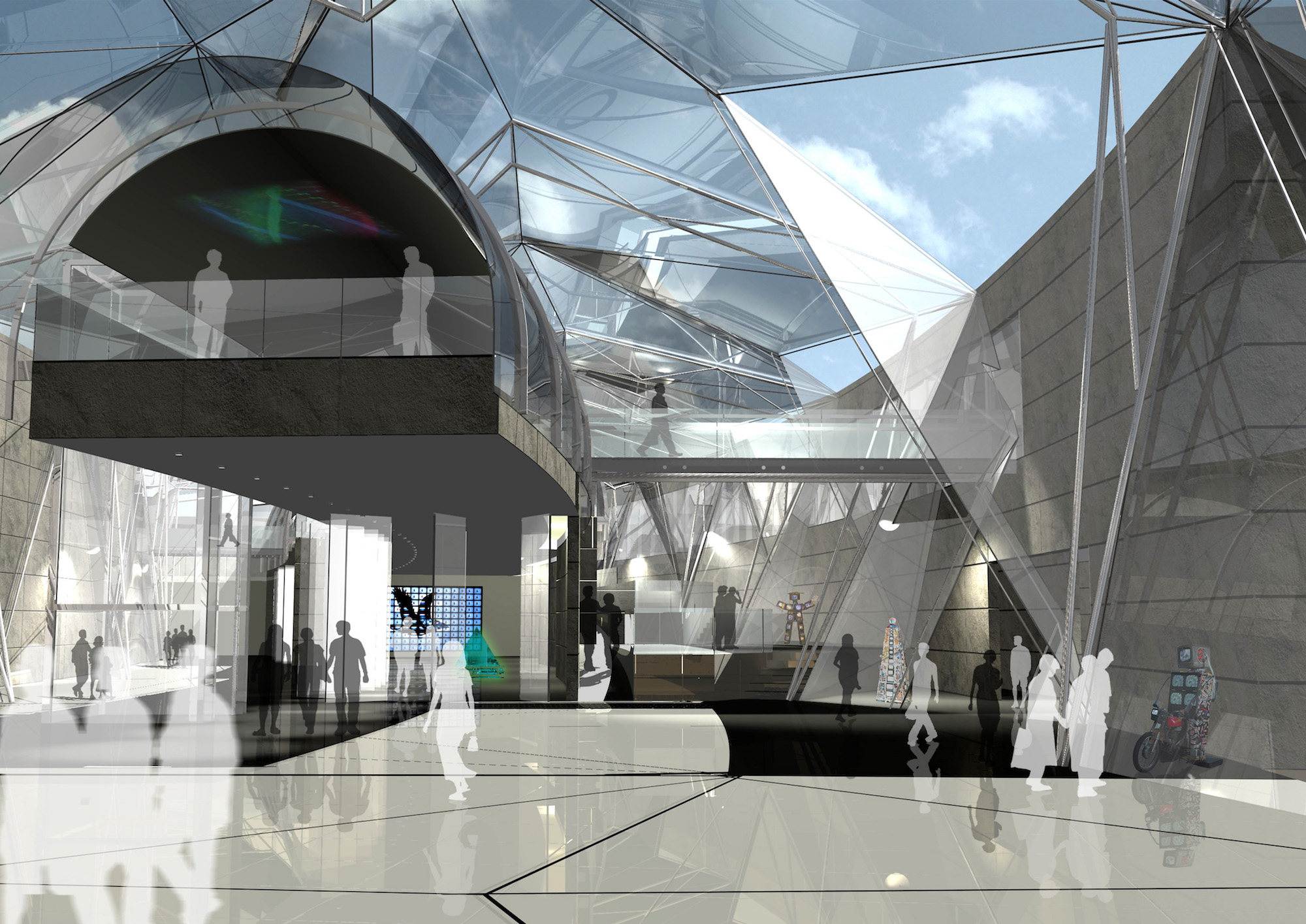 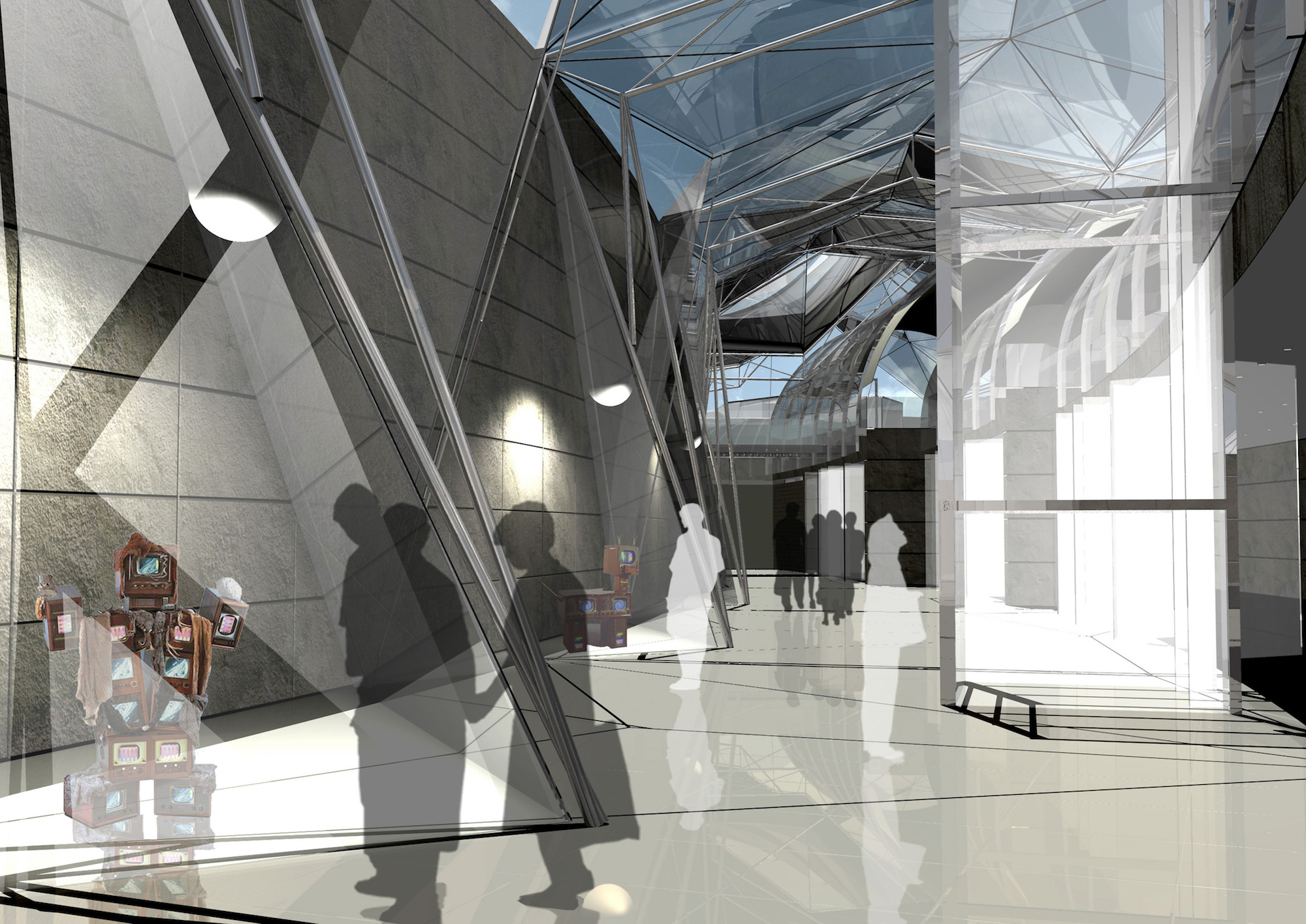 Nam June Paik Museum Competition
Putting Nam June Paik’s art in an art museum is an enormous challenge. From an early stage of Paik’s production through his association with the Fluxus artists, his art has been conceived to question the conventional notion of art which is symbolized by the building type of art museums. How does the architecture engage with such profoundly creative works, yet at the same time fulfill some of the most mundane needs of visitors and curators?

Creation and Convention
Our proposal is ultimately inspired by Paik’s production. Paik’s art is at once creative and deeply engaged with settled patterns of human behavior. The blurring of the boundaries between life and represented realities through his video installations, the twisting of paths of laser beams, all point to deliberate interventions in the process of developing “usual” habits (and ideas and ideologies).
The design of the Nam June Paik Museum begins with a parallel process. Instead of following the conventional typology of art museums in which art are displayed in a series of inter-connected rooms linked by corridors and atriums, the proposal reverses the spaces of display and circulation. In this way, Paik’s art are placed in a context with a greater engagement with people and their movements, providing a more appropriate setting for a body of work which questions established boundaries between art and life. The mediated natural lighting for some areas of the museum display highlights this deliberate inversion of spaces.

Tensions Between Forces
The design of the museum begins with the structural grid, which is seen to be a set of given patterns. The grid is anchored with two solid blocks housing the supporting facilities of the museum. Like in Paik’s works, this essential and conventional grid at the heart of the museum is deliberately altered, by what can be identified as four forces, Light, Art, Context and People. The means of this deliberate alteration is “collision”, which creates important 3-dimensional responses to use and form. This has been a process which generated a set of planned and incidental spaces, intriguing geometry and complex forms.